In a major development, the union health ministry has asked the states to conduct ‘centralised counselling’ for all postgraduate medical and dental programmes. The common counselling will include government, private as well as deemed universities from the academic year 2017, creating a single window system for admissions to MD, MS, MDS and PG Diploma programmes in the country.

A notice released by the Ministry of Health and Family Welfare, suggests that most of the states are willing to follow NEET UG and hold common counselling for postgraduate medical admissions as well. “In view of the successful combined counselling for UG programmes for the academic session 2016-17, it is considered appropriate for the States/UT to hold combined counselling for admissions to all PG medical and dental courses in the States and UTs including private and deemed universities from the academic year 2017-18,” states Amit Biswas, Under Secretary to the Government of India in his letter addressed to all Principal Secretaries of Medical Education. 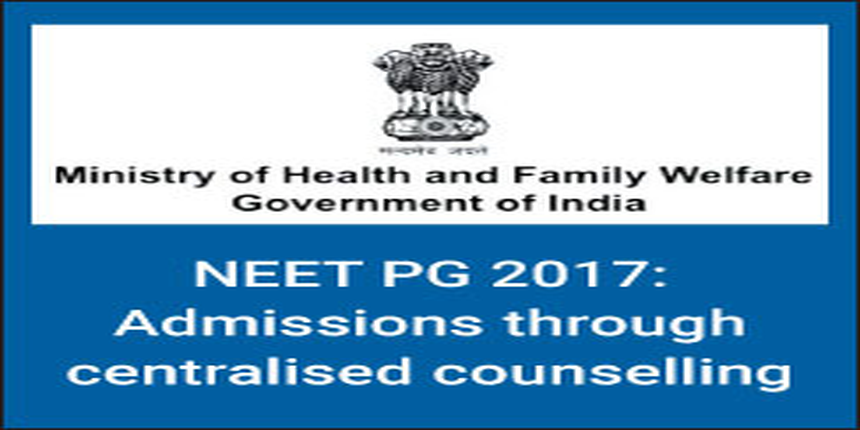 Private and deemed universities conducted their counselling at the institute level.

The process for filling up the All India Quota seats at State medical and dental colleges remains same.

On September 8, 2016, the National Board of Examinations (NBE) had scrapped the Diplomate of National Board Centralised Entrance Test (DNB CET) and stating that it would instead be accepting NEET PG scores for entry into super specialty courses. Read the full story here.

On April, 2016,the Supreme Court ordered to conduct National Eligibility-cum Entrance Test (NEET) UG for admission to MBBS/BDS courses in Govt/Private Medical/Dental Colleges including deemed universities. Following this, all the private medical colleges and deemed varsities had to cancel their entrance examination and admitted candidates on the basis of centralised counsellings conducted by States and UTs. Read the full story here.

Stay tuned to www.medicine.careers360.com for more information on NEET PG

NEET PG 2020 to revised cut off , the chances are less . but you keep tracking on portal for this information . till now neet pg has not issued such notification.

hope this help you

You can use the careers360 NEET PG college predictor to predict your branch and college. All you need to do is fill the required details, Careers360 will predict the college for your score. The link is given below

The link for Maharastra PG medical list is given below

Based on your rank you can get MS General surgery in the following colleges. I will also mention the total fees -

Hi..Can we leave seat in Neet pg 2020 Telangana state counselling after 3rd round before mop up round...is free exit possible?

Free Exit options is only available for Round 1. It is not available for 2nd, 3rd and Mop Up Rounds. Generally there is no 3rd Round and mop up round is conducted based on the seats available. For example if you are allotted a seat in Round 1, even if you do not join or resign the seat, you will not be penalised for it because of the free exit option. But for Round 2 or Mop up Round, if you do not join the allotted seat, you will have to forgo the security deposit because there is no free exit option there.

Is there bond for all india candidates in government medical college in karnataka and maharashtra?

FMGE Application Form 2020 (Out) - Registration, Fee, How to apply, Dates