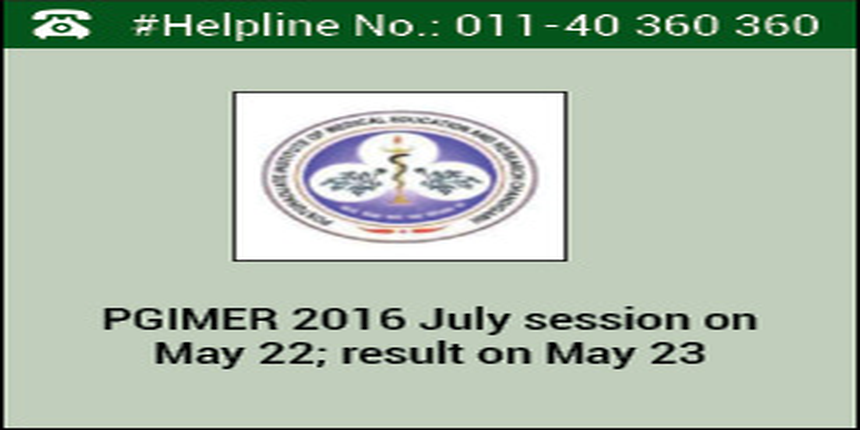 PGIMER 2016 for the July session will be conducted on May 22, 2016 for providing admissions to around 165 seats in 20 postgraduate courses in Master of Surgery (MS) and Doctor of Medicine (MD) programmes. The exam conducting authority, Post Graduate Institute of Medical Education and Research, Chandigarh has released the exam notification for the July session.

As per the official notification, PGIMER 2016 July will be conducted on May 22 at various centres in Chandigarh and the result will be declared on the next day, i.e. May 23, 2016.

To know all the details about PGIMER 2016 July Session: Click Here

Stay tuned to www.medicine.careers360.com for more news and information on PGIMER 2016 July session

Hello,
.
Here are the details of PGIMER important dates,

if my internship is going to end in march 2021, can i appear for pgimer exam in november 2020? or do i need to complete the the internship for giving an attempt?


So, PGIMER 2020 will be conducted twice a year in the month of November and June for January and July session respectively.

And its official eligibility criteria says :

Candidates must have completed a one-year rotatory internship by December 31, 2019, for the January session.
and;
Each candidate applying for PGIMER 2020 must have a permanent/provisional registration certificate issued by the Medical Council of India.

So, unfortunately you cannot appear for PGIMER 2020.

Hii Gitika!
The next application form for PGIMER will be for July session. The application forms will be released in the second week of March 2020 and will be ending till second week of April 2020. The examination will be held on 23 May, 2020. So, just keep an eye on the official Website and fill the application form. For more details refer the following link -
https://www.google.com/amp/s/medicine.careers360.com/articles/pgimer/amp
Hope this helps.
Good luck!
Read More
Answer
Answer Later
Report
5 Views

if I did Punjab board . Is there any problem?

No there is no issue in that. You can study whatever board you want.

when is form filling date .and

For July session they still had not released any schedule. You need to wait for it.

View All Questions
Have a question related to PGIMER Entrance Exam ?

Your PGIMER Entrance Exam brochure has been successfully mailed to your registered email id .