NEET 2019 Topper Interview: After results of NEET 2019 was announced on June 5, an environment of festivity took over the household of Arunangshu Bhattacharyya who has clinched the NEET AIR 19. Arunangshu himself couldn’t however partake in the celebrations, as he was away in Mumbai to participate in an Olympiad. When we got in touch with Arunangshu, we got an insight into his genius mind and what plans he has for his future. For example, he wishes to get admission into AIIMS New Delhi, but is ready to wait until AIIMS MBBS 2019 results are declared. A native of Surat, Gujarat, Arunangshu moved to Kota, Rajasthan, in Class 11 to give wings to his dreams of becoming a doctor, which was seeded in his mind while still in Class 6. He toiled hard, studying up to 10 hours a day, but always making sure to find time for his hobby: studying up on politics. 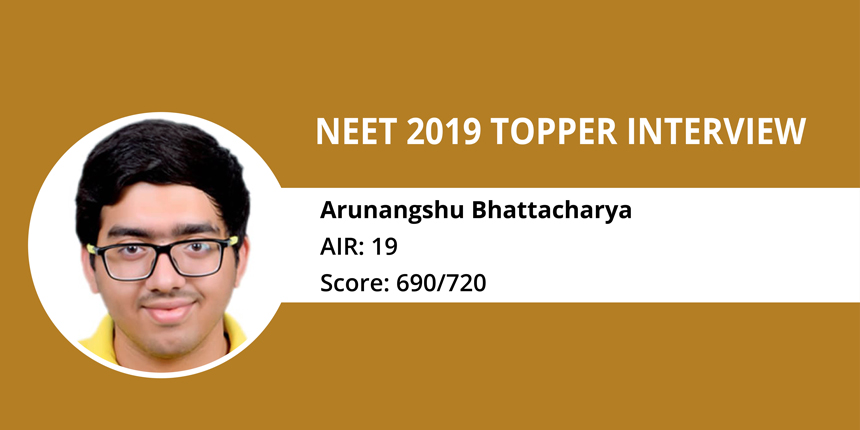 Careers360: First of all, congratulations on emerging as a NEET 2019 topper! How are you feeling about your NEET results?

Arunangshu: I was expecting a good result in NEET 2019, and so felt very happy. I am actually in Mumbai for an international camp, so there was bi celebration. Instead I celebrated with other students in the camp by ordering pizza!

Arunangshu: I am from Surat, Gujarat. I completed my 10th from J.H. Ambani Saraswati Vidya Mandir School, Surat. In the 11th standard, I shifted to Kota and took admission in Disha Delphi Public School. I simultaneously also took up coaching at Allen Kota.

Arunangshu: Since I was in class 8 and 9, I took a special liking for Biology. This love kept on increasing, and over time I became attracted to medicine.

Arunangshu: Support can be at different levels, but according to me the most crucial is emotional support. When you are preparing for an exam like NEET 2019, there can be lots of ups and downs, and you need a solid support network to be around you, and I got it from my family. Study related support is also important, which I got from my coaching centre and teachers at my school.

Arunangshu: I started my medical-oriented preparation when I was in class 11. I prepared mainly from NCERT books, and completed it by reading notes from my coaching institute. My suggestion is one should avoid two many different books, as it only creates confusion. Have a few good books for each subject, and just follow them.

Also, many students only focus on the problems section of NCERT books, while skipping the text. But the test, even though they might appear boring compared to other books, are essential to improve one’s understanding of the basics and do well in the exam.

In between my coaching and classes, I got only around 4-5 hours of study a day. When there was a holiday, I could study up to 10 hours a day.

Arunangshu: Yes, I did coaching from Allen Kota. The main motive of coaching is that you get competition. For example, in Gujarat, there are say more than 50,000 school, and each school will have a topper. But it is not necessary that each one of these toppers would top a national-level exam like NEET, because only a handful do.

When you come to a coaching centre like Allen, you immediately grasp the competition and what you are up against. Your peer group includes many school toppers.

Arunangshu: Coaching roughly was for 5- 5 ½ hours, while I did self-study for 4-5 hours.

Arunangshu: My strategy was to attempt Biology first. If the paper was easy, then I looked to complete it in 30 minutes if the paper is easy, and maximum 40 minutes if paper is difficult. For Chemistry I allotted 30 minutes, and finally 60 minutes for Physics. The time left is used to go over unattempted questions.

Arunangshu: NEET 2019 question paper was very easy. Physics and Chemistry were my strong points. In Chemistry I focused more on Inorganic, which turned out to be helpful because there were more memory-based questions this year.

Arunangshu: I am an avid reader and a keen follower of politics. So, whenever I had spare time I used to read up on the latest political events.

Arunangshu: Of course the first credit goes to the family. The teachers at Allen also deserve a big shout out, my friends at the hostel where I used to live in Kota, and my school where I did m 10th.

Arunangshu: My first preference is AIIMS New Delhi, but if I don’t get AIIMS New Delhi then I may choose between Maulana Azad Medical College (MAMC) and JIPMER. In fact, based on NEET 2019 scores, I am already eligible for admission to MAMC.

Arunangshu: I am not thought so far ahead, but still if you ask then may be I would like to be a neurologist or a cardiologist.

Arunangshu: It is important for candidates to realize that there is a world beyond medicine. So, one must not shut the door on other important things in life, which can be politics, sports, dance, drama, music.

How is Allopathy different from Homeopathy - Candidates seekin...

There are any chances of cancellation of jee and Neet exams?

At this point in time, there is no clear notification regarding the same. A parents body has filed a PIL in the Supreme Court requesting for JEE Mains and NEET to be postponed further due to the increased cases. They have come up with 10 reasons as to why JEE Mains should be postponed. And IIT Delhi has already cancelled conducted JEE Advanced in Foreign Countries. And Parents body from Gujarat also filed a PIL requesting NEET and JEE Mains to be conducted as per schedule without any delay. Supreme Court is yet to pass an order on it. So until there is an official notification regarding this from either NTA or MHRD, we have to assume that JEE  will be conducted as scheduled from September 1st to 6th. There are 36 days more to go for the D day and anything might happen. If Supreme Court accepts the PIL, it might then ask MHRD and NTA to file in their petitions and then a call will be taken accordingly after all the pleadings are heard. So while it is still under hearing, we cannot say anything at this point in time. We have to wait to hear from either NTA or MHRD regarding the same. Until then the only wise thing to do would be to prepare for JEE as if it is going to happen from September 1st to 6th  and NEET for September 13th so that if the schedule doesn't change, you are not thrown off the guard.

Looking for details for NRIs. my kid is in 12th grade now and will finish her 12th grade by May 2021 here in USA. and planning to take some trainings from India for NEET. She did all Biology, Chemistry and Physics. What are the fees for NRIs in AP?>

Sarvatma Mishra 13th Aug, 2020
https://medicine.careers360.com/colleges/list-of-private-medical-colleges-in-andhra-pradesh. Maybe this maybe helpfull to u
It's nearly 30 to 35 lakhs per annum.
Read More
Answer

If I get 450 marks in neet 2020 .will I get free seat in private college in telangana and andhrapradesh .my caste is BCB?

There is no concept of Free seat. There are 3 Categories in Private Medical Colleges. Category A is the Government Quota Seats. And only candidates of the home State are eligible to apply for these seats. Under this Category, 417 marks secured a seat in Mahavir Institute of Medical Sciences under OBC Category. That was the cut off. Now this is 2018 data and cut offs change every year. Cut offs change every year depending on various factors such as no.of Candidates appearing for the exam, no.of Candidates qualified, top NEET score and difficulty of the exam. So even for Category A seats in Private Medical Colleges, you need to aim for atleast 475 and above. 450 might not be enough.  And if you are preparing for NEET, you may as well try our NEET Knockout package: https://learn.careers360.com/knockout-neet-may/ . And because you have 34 more days to prepare for NEET, you may as well use this opportunity.

CMC Ludhiana is a Christian Minority Private Medical College. We do not have 2019 data. But in 2018, under All India Quota, 530 marks secured a seat in CMC Ludhiana under General Category. And 459 marks secured a seat in this College under Minority Category. Now this is 2018 data and cut offs change every year. Cut offs change every year depending on various factors such as no.of Candidates appearing for the exam, no.of Candidates qualified, top NEET score and difficulty of the exam. For a seat in this College under General Category under All India Quota, you should aim for more than 575.  And if you are preparing for NEET, you may as well try our NEET Knockout package: https://learn.careers360.com/knockout-neet-may/ . And because you have 34 more days to prepare for NEET, you may as well use this opportunity.

Hamdard Institute of Medical Sciences is a Deemed University. . Under All India Quota, All the 15% of All India Quota Seats except for Jammu and Kashmir, 100% Seats at Deemed and Central Universities, IP Quota seats in ESIC Colleges, Seats at AFMC, AIIMS and JIPMER are filled by DGHS. Going by this Hamdard also fills its seats through All India Counselling. In 2019, under All India Quota, 543 marks secured a seat in Hamdard Institute of Medical Sciences under General Category. This was after the stray vacancy round. And that was the cut off.  Now as mentioned, this is 2019 and cut offs change every year depending on various factors such as no.of Candidates appearing for the exam, no.of Candidates qualified, top NEET score and difficulty of the exam. So for a seat in 2020 in Hamdard you will need more than 600 if you belong to General Category and atleast 500 if you belong to Reserved Categories. exam And if you are preparing for NEET, you may as well try our NEET Knockout package: https://learn.careers360.com/knockout-neet-may/ . And because you have 34 more days to prepare for NEET, you may as well use this opportunity