AIIMS MBBS 2019 Exam Analysis - Candidates who have appeared in the national-level exam can assess their performance and chance of admission using AIIMS exam analysis. The three and a half hour long computer-based AIIMS MBBS 2019 exam is conducted in two shifts a day on May 25 and 26. AIIMS MBBS exam analysis 2019 will help the candidate get insights into the exam, like the overall and section-wise difficulty level, type and weightage of questions asked, and also expected cutoff range. The general trend is difficult the paper, lower the cutoff and vice versa. 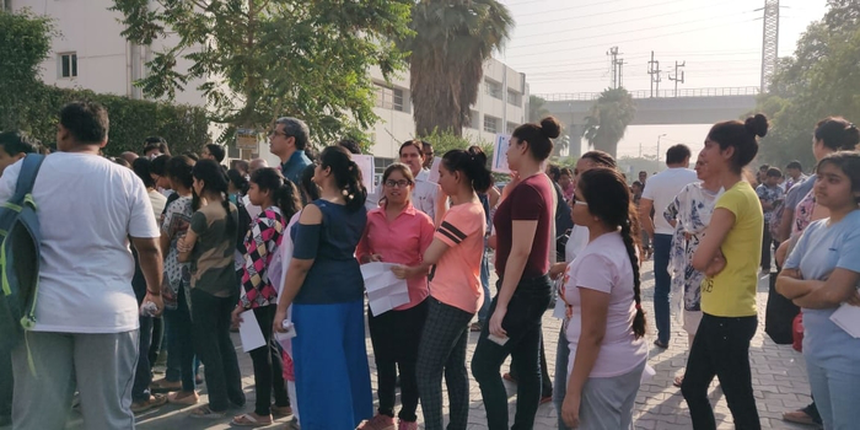 Using these insights, AIIMS MBBS aspirants will be to evaluate his or her chances of getting admission or being offered a seat at a preferred institute. For the current session, AIIMS MBBS 2019 has been conducted for admission to 1,207 MBBS seats, including 7 for foreign nationals, in 15 participating AIIMS.

The AIIMS MBBS 2019 entrance exam is conducted by All India Institute of Medical Sciences (AIIMS) New Delhi at approximately 155 centres across India.

I am Upashana and it was my first attempt. Physics was difficult, Bio was half difficult and half moderate, and Chemistry easy. Physics had a nuber of questions from circuit theory and semi conductor. Chemistry had half questions from organic, and Biology had questions from plant and animal kingdom. Overall paper was moderate

Hi, my name is Shiv Chaudhary. I am doing coaching from Allen Kota. I found the paper to be moderate. Physica was hard, but Bio was easy while chemistry was moderate. In comparision to NEET also, Physics questions were much tougher. I found that all topics were covered in physics, and there was no extra weightage given to any topic. AR being my weakness, I found questions related to AR difficult. During NEET, my strength was Pysics, but here Biology saved me!

I am Raman Chauhan. The overall difficulty level was moderate. Physics was the most difficult section; this section had quite a few questions from alternating current. Biology, I think all the topics were equally covered. In Chemistry, organic was a little difficult. Even though I precisely which questions, I felt quite a few were out of syllabus. I have taken coaching from Aakash Delhi.

Hello, I am Shweta Srivastav. The AIIMS MBBS paper is always difficult, especially due to Physics. I think Physics had the maxium questions from Mechanics. In Chemistry, majority questions were from inorganic. Overall the difficulty level was moderate.

Barsha: This was my first attempt. The paper was of moderate difficulty level. Biology was easy, but Physics was a little on the difficult side. Chemistry again was also of moderate difficulty. I have done coaching at Naraina Academy, Mayur Vihar. Prepared from Arihant followed modules. I have also appeared in NEET, which was comparatively easier.

Hima Siddiqui: Hi, I am a first time candidate and found the paper moderate. Physics was tough, Chemistry was normal difficulty level, while Biology was easy. My favourite subject was Physics! I have also appeared in NEET 2019. Of the two exams, I found the AIIMS MBBS question paper easier. I did self-study and didn't take any coaching.

Aakash: It was my second attempt. Compared to last time, this time I fared much better. Speaking of subject-wise difficulty level, Physics was moderate to high, whereas Chemistry and Bio were easy. My strength is Physics, but still I found the paper tricky. As compared to NEET, AIIMS MBBS is always more difficult, and this time also the story is the same.

Kumud: As a fresh candidate, I found AIIMS MBBS exam was of moderate difficulty level. Of the three subjects, Biology was the easiest, followed by Chemistry. Physics was the toughest. I have also appeared in NEET, and would say AIIMS MBBS was easier.

Before going through the analysis, the candidates can check here the AIIMS exam pattern to gain an insight of the important details like the total number of questions from each section and marking scheme.

The test takers of AIIMS MBBS 2018 across both sessions of the first day rated the overall difficulty level of the paper as being moderate to tough, with many saying it was easier than they expected. As per majority of the candidates, Biology was the easiest section of the paper as maximum questions were from NCERT books. Candidates found Physics to be the toughest as the questions were calculation intensive and tricky, which consumed time. Chemistry was moderate with questions from the known areas.

Allen Kota and Resonance are two of the prominent coaching institutes which have released useful material with regard to the exam analysis of AIIMS MBBS 2018 and the questions asked. According to the experts, the paper was moderate. Physics proved to be the toughest section while Biology and Chemistry was average.

According to Brajesh Maheshwari, Director of Allen Career Institute, each section of AIIMS MBBS comprised 40 objective type questions and 20 Assertion Reason questions. 20 questions were asked from General Knowledge and Aptitude.

Physics – The Physics section was the toughest for almost all candidates. Quite a few students used the screen calculator in some of the questions. Many questions required the use of logic and some creative questions were asked which consumed time. Students who had prepared through conceptual study did not face many problems and found the Assertion Reason questions to be relatively easy.

Biology – The Biology section was the easiest for almost all candidates with questions coming primarily from the NCERT. Some questions also involved diagrams. An equal number of Botany and Zoology questions were asked and very few questions were confusing.

Chemistry – The Chemistry section was considered to be moderate. Many candidates however complained about the confusing language used in some of the questions which made it diffcult to know what logic could be applied. The questions were mainly from NCERT texts. The Assertion Reason questions were not difficult or time-confusing.

Questions and Answers for Day 1 (Session 1) by Resonance -

Resonance Classes have published 154 out of the 200 questions that were asked in AIIMS MBBS morning session on May 26. Answers and solutions to the same have also been provided. As per the institute, the questions were collected from appearing students based on their memory. Students should note that the actual options that appeared in the question paper of AIIMS MBBS may be different to that shared by Resonance and some of the questions may also vary.

To check the questions, answers and solutions of AIIMS MBBS 2018 by Resonance, Click Here

As per students and experts

With 2018 being the first time that AIIMS MBBS was held on a second day, candidates were unsure about what to expect from the question paper and how different it would be from the morning and evening shifts on the first day. As per the initial reports, the overall pattern of the paper was the same, with Physics proving to be difficult and Biology easiest. The topics from which questions were asked in the second day shifts varied considerably from the first day. For example, while the first day Chemistry questions comprised many from Organic chemistry, the second day had more from Physical chemistry.

A detailed analysis of the AIIMS MBBS question paper on May 27 will be provided here as soon as it is made available.

AIIMS MBBS 2018 is considered to be a lot more competitive as compared to NEET and JIPMER MBBS, by students and experts alike. This is mainly because around 3 lakh candidates are competing for only 800 MBBS seats on offer in nine AIIMS institutions.

As per the students who cleared AIIMS MBBS entrance last year and experts’ opinion, a score of above 150 in AIIMS can give aspirants a solid ground to secure a seat in AIIMS. It should be noted that the number of seats on offer through AIIMS MBBS has increased this year and this might lead to a lowering of required cutoffs.

Since AIIMS MBBS never discloses the marks obtained by the qualifying students, the only point of reference is to see the available percentiles. However, most experts and former toppers agree that a score of 150 plus can lead to a rank within the top 100 and increase chances for admissions.

For AIIMS MBBS 2018, the following mark ranges can be considered sufficient for admissions -

Cut off ranks from AIIMS MBBS 2017

While AIIMS New Delhi doesn’t release the marks of the candidates with the results, it releases their subject-wise and overall percentile scores along with All India Ranks (AIR). Given below are the last year closing ranks for AIIMS MBBS exam, which were sufficient for admissions in various AIIMS Institutions -

AIIMS 2019, like the preceding versions of the exam, will also use a normalization procedure to determine cut-off corresponding percentiles taking both the morning and evening slots across the days days into account. As per officials, if the percentiles for all four shifts turn out to be unequal, then the lower of the four will be the eligible category-wise cut-off. The Merit List for AIIMS MBBS 2019 will be prepared by the examination authority AIIMS New Delhi as per the marks secured by candidates in their respective categories in the exam. Only those candidates who clear the category wise cut offs will be eligible for a place in the AIIMS MBBS Merit List.