How is the study of Ayurveda different from Allopathy - Medical aspirants and in fact people, in general, have always been confused in the difference between Allopathy and Ayurveda. It is a well-known fact that Ayurveda has always been an essential part of our Indian system. From the smallest health issue like cough and cold to treating diseases like dengue and such, Ayurveda helps in all. However, an Allopathy doctor never gives a prescription of Ayurvedic medicine to any patient because legally they are not allowed to do so. This is because they are not supposed to be advising such medications to patients which they haven't themselves studied in depth. The difference between Allopathy and Ayurveda is significant and much valued in the field of medicine. 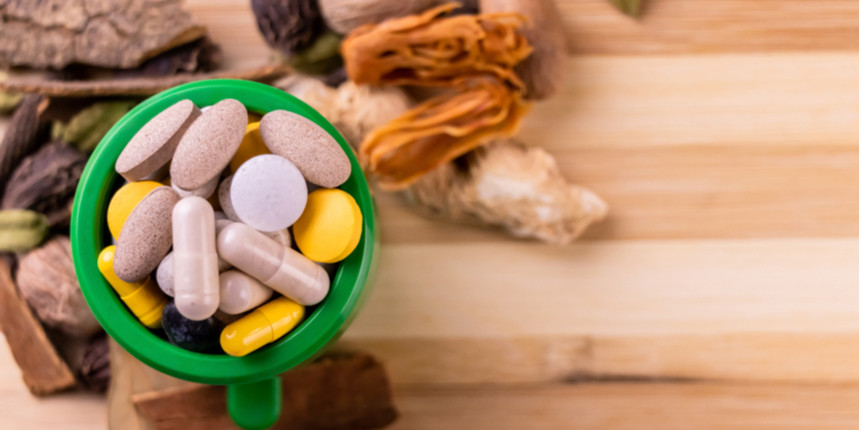 On one hand, Ayurveda is a field of medicine, on the other Allopathy is a constituent of alternative medicine courses in India. Also known as the mother of eastern medical science, Ayurveda originated in the Vedic period in India and aims at curing three types of elemental energies in the human body, Vata, Pitta, Kapha. For more details on how the study of Ayurveda is different from Allopathy, candidates can refer to the article that follows.

‘The Science of Life’ is the English translation of Ayurveda. This is an ancient form of medication with historical roots in India. Those modernized and forms of techniques and treatments that are derived from Ayurveda are commonly known as alternative medicine.

The various types derived from Ayurveda are known as alternative medicine. In Ayurveda, herbs, vegetables and minerals are used to cure diseases, which has been followed since the Vedic times. Also, the focus of Ayurveda is majorly on emphasising the importance of meditation, yoga and massage in the lives of people.

The main emphasis of Ayurveda on the cure/prevention of disease along with the all-round development and betterment of the human body. The fact that Ayurvedic treatment is time taking and that often results are delayed, cannot be denied. However, a plus point to this form of treatment is that it does not involve any side effects.

The admission to Ayurveda courses will be done through scores obtained in NEET exam. National Testing Agency (NTA) will conduct NEET 2021 exam for admission to the Bachelor of Ayurvedic Medicine and Surgery (BAMS) course.

Allopathy is an obsolete term for Modern Medicine. Candidates must note that in Allopathy such drugs are used which are clinically tested and proven to be of no harm to humans prior to administering them to patients. In Allopathy, dependence is on hypothesis, experimentation and the result of those experiments. Most Allopathic drugs have side effects on the human body. It is also often said that Allopathy is the scientific method of treating human diseases.

Allopathy is being constantly evolved for the inclusion of better-proven techniques of curing ailments and it also includes forms of treatment from alternative medicine fields once they are clinically tested and proven.

Candidates can look below for the difference between Ayurveda and Allopathy to understand both the concepts in a better manner. This will help them make informed decisions and careers choices in future.

Question: What is Ayurveda?

Ayurveda is an ancient form of alternative medicine which involves usage of  herbs, vegetables and minerals  for curing ailments.

Question: What is Allopathy?

Allopathy, also known as Modern Medicine, is based on proofs and successful clinical trials of medications.

Question: Which is better Ayurveda or Allopathy?

Since, both Ayurveda and Allopathy are different forms of treatment and medication, they both cannot be compared in terms of finding a better one. Both these forms have their own pros  and cons.

Question: Can Ayurvedic and Allopathic medicines be taken simultaneously?

Yes, patients can take Ayurvedic medicine and Allopathic medication simultaneously and it will not have any side effects.

Yes, you are eligible for sc reservation.

Reservation of sc/st is completely on the basis of caste and there's no income limit.

Income limit is there for only obc category.

So, being from SC category you are eligible for reservation even if your family income is above it lakhs per annum.

If I tell you about qualifying cut off marks then,

To get the complete list of colleges in which you have chances, you can go through our college predictor at

To help in your counselling, we have mbbs companion in which in addition to college predictor tool you also get information regarding various counselling i. e all india , deemed, central and state  counselling and you get to attend live webinars with experts to guide you and get all your doubts cleared. The link is given below:-

which are the goverment aided or semi goverment college I can apply in neet 2021 .

I hope you are doing good,

TO APPLY FOR ANY COLLEGE IT DEPEND UPON THE MARKS AND THE RANK YOU GET.

It looks like your query is incomplete, please enter the valid information in your query.You can state that in comment section. This details will help us to get you the most filtered and appropriate results and also we can assist you with your query well.

To know more about what RANK you can get please follow the following RANK prediction link:

To know more about what college you can get please follow the following college prediction link:

Im scoring 562 marks in neet 2021 ( general category bihar domicile) . Can I get any government medical College in West Bengal through AIQ ?

For you NEET UG score your expected Overall Percentile will be around Overall will be around 97.24 - 97.74 and your Predicted Rank is 39085 - 50235, th is analysis is done by experts and based on previous year's cut-off trends.

To predict your rank you below mentioned College Predictor Tool.

*Difficulty level of the exam.

*Number of students appeared in the exam.

*Caste Category of the students.

You can go through below mentioned link to know NEET UG cut-offs of Medical Colleges in West Bengal.

You can predict Colleges you can get for your NEET UG Rank using below mentioned College Predictor Tool.

I hope this information was helpful.

I AM BELONGING SC CANDITATE , MY EXPECTED MARKS 500-514 , CAN I GET GOVT MEDICAL COLLEGE

Hello aspirant,
Hope you are doing well. It is a nice score. Your rank will be around 87000 with 514 marks.
Yes , you have chance to get government seat for mbbs with 514 marks . Although getting government seat for mbbs depends upon various factors like number of students appeared in the exam, category, region, state, state rank, AIQ rank,etc.
Since you didn't mention the name of your state so, it is difficult to predict college you can get in your state quota .
If you want to predict college then follow the given link:-

Hope this information will help you and have a bright future ahead.

in which all colleges of BAMS and BHMS i can get admission my category is OBC if i am getting 150 marks in NEET 2021. please answer fast

hope you are doing well and safe. As per your query , I would glad to inform you at your marks you holds very very low chances of getting admission even sc category in courses like bds ,mbbs and bams course . I would advise you to start prepare for the next attempt . Following is the reference link for cut off:-

Hope you found this answer informative. Best wishes for your future