NEET 2019 Topper Interview - The date of NEET result declaration i.e. June 5, 2019 has been engraved as a day of pride for a Delhi boy Bhavik Bansal. Being the AIR 2 holder in NEET 2019, Bhavik is also the Delhi state topper by obtaining 700 marks out of 720 in NEET. The child of Delhi government employees, Bhavik is the first person in his family to pursue medicine as a career. This PC gamer firmly consider NCERT as the Bhagavad Gita for medical preparations. Willing to start his MBBS journey in AIIMS, New Delhi, he is waiting for the results. Aspiring to be a medical researcher, Bhavik Bansal, who secured 99.9997873 percentile scores in his exclusive NEET topper interview 2019 has shared the prominence of NCERT books for preparations. 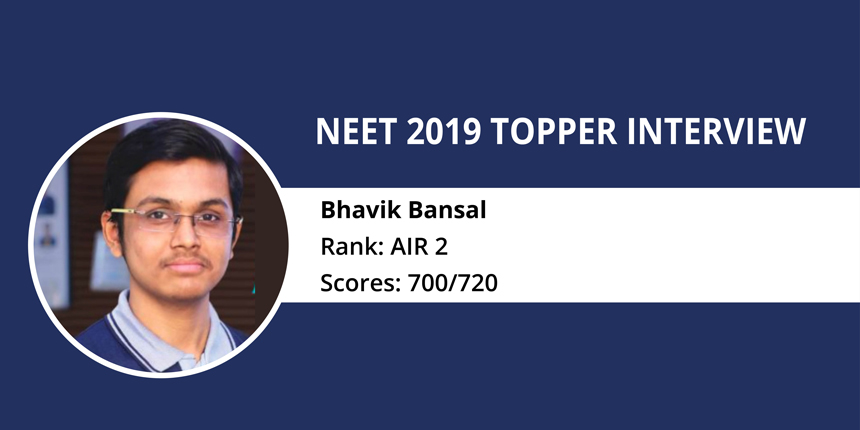 Bhavik Bansal: When the NEET 2019 result was out, there was a mixed feeling. However, after a couple of days of the declaration of results, the feeling has subsided.

Bhavik Bansal: I am the first person in my family who opted medicine as a career. My mother and father are Delhi Government employees. I have passed my Class 12 from Vivekananda School, Anand Vihar. Earlier in Class 10, I was in Seth Anandram Jaipuria School, Ghaziabad.

Bhavik Bansal: It is solely my choice. My parents never tried to influence my choice and always motivated me to do better in my choice of stream.

Bhavik Bansal: The priorities were set always in a right manner. They never force me to do something other than what I thought of doing.

Bhavik Bansal: I have only appeared for AIIMS MBBS.

Bhavik Bansal: The basic thing is that Class 12 and NEET/AIIMS/JIPMER MBBS have same syllabus. So, I revised the complete syllabus for three to four times. It should be remembered that NCERT is the bible for preparations of all subjects. NEET question paper contains 80% to 90% of the questions from NCERT.

Bhavik Bansal: For most of the time, I prepared the topics as hand forgetting about NEET or any other medical exam. I took the mock test and NEET previous year question papers. When I studied the chapter-wise subjects, I used to do it in an intense manner. But that also builds up your concepts.

Bhavik Bansal: Yes, I took classroom program from Aakash Institute, Preet Vihar. They really helped me throughout the two years of my NEET preparations. Yeah.. you always need to edge to prepare for any competitive exams.

Bhavik Bansal: My self-study schedule was quite irregular based on the topic. There was time table which I followed. The coaching centre from Class 11, it was a regular easy coaching for four hours a day. However, later in Class 12, they intensified the classes. There was no fixed timings in the weekdays and there was 6-8 hours of classes on the weekends or holidays.

Bhavik Bansal: I always made a strategy to attempt Biology, followed by Chemistry and Physics. NEET 2019 exam for the year 2019-20 was not lengthy enough, therefore my strategy has not worked. But the weightage of questions asked every year in the NEET exam is the same.

Bhavik Bansal: NEET 2019 paper was easy. I did not find any tougher or easiest section. Though there were some controversial questions in Biology, which are still to be rectified till date. After the challenging around 7 to 8 Biology questions in NEET answer key 2019, NTA has only corrected three of them.

Bhavik Bansal: Through the last two years, I always prepared for AIIMS, not for NEET. I used to solve only difficult questions from Physics for AIIMS MBBS 2019 exam.

Bhavik Bansal: Yeah sure. I love PC gaming and watching youtube. I never left my passion for watching social media for the preparations. I do watch stand-up comedy and science related videos.

Bhavik Bansal: This is a difficult one. I cannot pin-point a single one in the last two years. Small things summed up to a book.

Bhavik Bansal: Definitely, AIIMS, New Delhi. I am actually waiting for the results which will be announced by June 12.

Bhavik Bansal: I cannot say anything. Most probably, I will go into medicine research. But still, no one knows their future.

Bhavik Bansal: I would strongly like to suggest that NCERT should be followed thoroughly. Medical candidates should consider NCERT as the Bhagavad Gita, as it is the basic of all syllabus. I find most of the students focusing more on the 10% questions, which will be asked out of the syllabus. However, if you will go through the 90% NCERT concepts, there will be nothing to stop you from getting admissions in the best government colleges. Aspirants should be confident enough to appear for the entrance exam.