The much-awaited NEET application form window for undergraduate medical aspirants released on February 8, 2018. Major changes have been announced for National Eligibility cum Entrance Test. Amongst all the newly introduced changes, CBSE has introduced a technical change in the manner in which NEET Application Form 2018 is filled. From this year onwards, CBSE is instantly authenticating candidate's information entered at the time of registration with UIDAI Aadhar database. In case one's data doesn't find a match with Aadhar database, then the system will not register the candidate and will not allow them to proceed. Also, on February 22, 2018, after taking into consideration several candidate's queries received about the mismatch of details in their Aadhar Card and Class 10 and 12 certificate, CBSE has issued a notice clarifying the action which can be taken by such students to fill NEET 2018 application form. 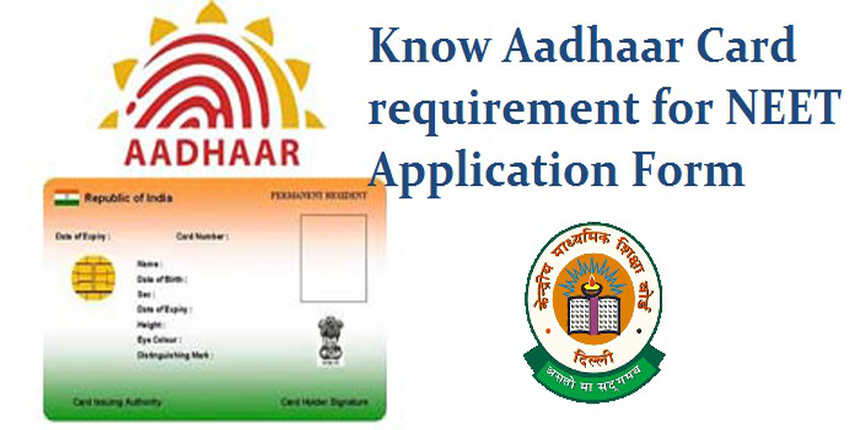 Latest:  As per the latest Supremem Court directions, Aadhaar card is no longer mandatory for NEET application or any other entrance exam. Instead, candidates can also give details of a valid photo ID like Voter ID, Passport, Bank Account, Ration Card, Driving License etc. NEET Application form 2019 is now available till November 30, 2018.

CBSE Notice on Aadhar and NEET Application Form as issued on February 22, 2018

As per the official bulletin, it is mandatory for candidates (except those belonging to J&K, Assam or Meghalaya) to provide their Aadhar details while filling NEET application form. In the larger interests of NEET aspirants, CBSE has published a public notice on what is to be done in case of a mismatch between the details of  Aadhaar Card and Class 10 & 12 certificates. CBSE has announced that such candidates can register for the NEET 2018 on the basis of the details as given in Aadhar Card and then they may go for getting their details matched in all documents by filling correction forms at relevant authorities. Careers360 brings you complete information on key elements related to Aadhaar Card requirement for NEET 2018 application.

The CBSE has decided that candidates who are Indian nationals/citizens or/and ordinary residents of India, will have to mandatorily provide their Aadhaar Card details while filling NEET 2018 application form. This rule is not applicable for candidates belonging from J&K, Assam & Meghalaya. Besides this, from this year onwards, immediate authentification of candidates' information with UIDAI Adhar database is being done. Whosoever's data will not match, he/she will not be able to register for NEET 2018.

CBSE on February 22, 2018, released a notification clarifying students' doubts about how to fill the application form of NEET 2018 in case of any mismatch in candidates' information as given in Aadhar Card and Class 10 & 12 certificates. The clarification comes after it received several complaints from confused aspirants. As per the notice, CBSE has said that in case of a mismatch between records of candidates' Aadhar Card and School/Boards certificates they can:

The applicants of NEET 2018 are required to provide their Aadhaar number, name, date of birth, father & mother name and gender at the time of registering for NEET. The date of birth, the name of the candidate, Aadhar Number and gender should be same as mentioned in the Aadhar card, for these details are verified immediately with UIDAI Aadhar database for the purpose of identity authentication. In case one doesn't have an Aadhar card or find any discrepancy in the Aadhar Card data, they can take steps as applicable to them on the basis of their relevant situation.

NEET 2018: Why Aadhaar Card is required for Applications?

The use of Aadhaar Card for the NEET applications will result in the accuracy of the details furnished by the applicants. According to officials, this will further help in ascertaining the identity of the NEET applicants at the examination centres in a more convenient and hassle-free manner. Moreover, the Aadhaar information obviates the need for producing multiple documents to prove one’s identity, as the Aadhaar document specifies Unique Identification Number for each Indian national.

FAQs on Aadhaar Card for NEET 2018

Question: I belong to Jammu and Kashmir. Do I need to enter my Aadhaar Number while filling online application form of NEET 2018?

Answer: Candidates belonging to every Indian state except Jammu & Kashmir, Assam and Meghalaya are required to enter Aadhaar Card information in the NEET 2017 applications. For candidates who belong to J&K, Assam or Meghalaya, they can enter their Passport Number or Ration Card Number or Bank Account Number or other government-issued ID card number, in case they do not have an Aadhar Card.

Question: I belong to Nepal and a citizen there. I do not have either Aadhar Card or passport. What should I enter on the place of ID proof?
Answer: Such candidates can fill details of any government issued ID proof.

Question: I am an OCI/NRI/Foreign candidate. How can I apply for NEET 2018, without Aadhar Card?
Answer: Candidates who live outside India can give their passport details at the time of registering for NEET 2018.

Question:  I have already applied for correction request of data in Aadhar Card. How can I register for NEET 2018 and fill the application form?
Answer: Candidates who have already applied for corrections in either biometric or demographic information in their Aadhar Card, they can register for NEET 2018 by entering 14 digit Aadhar Enrollment ID or UR No. (including slash) as printed on their slip issued by the Aadhar centre after submitting the updation request.

Question: The name of my father and mother is not same in the Aadhar card as in my Class 10 and 12 certificates. What should I do?
Answer: It might be worth noting that the details of mother and father are not being matched UIDAI Aadhar data, so they can fill the details of their parents either from Aadhar card or Class 10 & 12 certificates, whichever is correct and can later apply with relevant authorities for getting the information corrected.

Question: Can we change photo NEET 2019?Answer: Once application form is submitted, changes to uploaded photo can be done only during correction window (January 14-31). Also, the photo attested on the admit card must be the same as the one uploaded in the application form. Take a printout of NEET admit card 2019 download pdf and paste the photo in the assigned space.