NEET 2019 Topper Interview: The result of NEET 2019 has finally announced on June 5, on the auspicious occasion of Eid. The announcement of result on the day of Eid brought the joy of spring for NEET topper 2019, Raghav Dubey. Hoshangabad boy bagged NEET AIR 10 with 695 marks out of a total of 720. A son of a Biology teacher, Raghav also developed a keen interest in Biology and wish to pursue MBBS from AIIMS, New Delhi or Maulana Azad Medical College, New Delhi. With the proper guidance of teachers and motivation from friends and family, Raghav has cracked the NEET 2019 exam. Raghav Dubey, who secured 99.9992203 percentile in NEET UG, focused on the importance of self-study in his exclusive NEET 2019 topper interview with Careers360. Raghav is a passionate swimmer and loves to spend time with his family. Here is the complete interview of NEET 2019 topper, Raghav Dubey, and his success story. 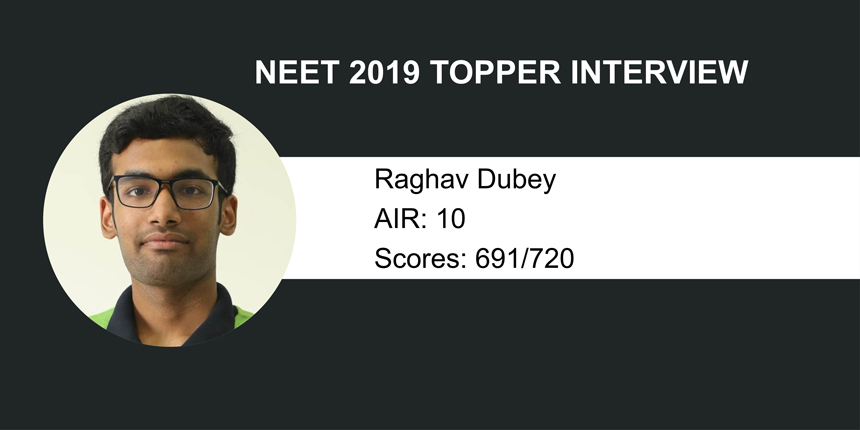 Careers360: First of all, congratulations on emerging as a NEET 2019 topper! How are you feeling about your NEET results?

Raghav Dubey: I am feeling happy. I never expected to become NEET 2019 AIR 10. So, this day has been the most joyful day.

Raghav Dubey: I belong to Hoshangabad near Bhopal, Madhya Pradesh. I completed my Class 10 and Class 12 from Hoshangabad itself. Being an average student in schools I was satisfied. I moved to Kota two years before. My father is a farmer-cum-businessman, while my mother was a Biology teacher now turned as a housewife.

Raghav Dubey: Like my mother, I was also really drawn towards Biology and that is why I thought of pursuing medicine as a career and becoming a doctor.

Raghav Dubey: They really supported and motivated me a lot. This is a team effort of my family. However, they never forced me to chase a good rank but always advised studying hard. My family has been a constant support for me. They have stood with me through all hurdles in life.

Careers360: Can you share with us your overall and subject-wise score in NEET 2019?

Raghav Dubey: I managed to obtain 695 marks out of 720. As per the subject-wise marks are concerned, I scored 345 in Biology and 175 marks in Chemistry and Physics, respectively.

Raghav Dubey: I have been preparing for NEET UG exam for last two years. The major three subjects for NEET i.e. Physics, Chemistry and Biology were almost done in a year. Then, I just had to prepare for English and other additional subjects. Though, the board preparations strengthen my NCERT concepts.

Raghav Dubey: There was no routine for NEET 2019 preparations. I just followed my teachers' advice and used to revise each and every topic. I always tried to complete a topic from all the three NEET subjects.

Raghav Dubey: I took coaching from Allen Kota for two years. And yes, most of the credit of my success goes to Allen Kota. There were daily routine practices and motivation sessions.

Careers360: How much time did you devote to self-study vs. coaching?

Raghav Dubey: After six hours of coaching, I always tried to study 5-6 hours a day. However, during weekends or holidays, the time span used to increase to 7-8 hours. I never focused on the time I studied but was always tried to focus more on completing my topics.

Careers360: What was your exam day strategy for all three subjects, namely Physics, Chemistry, and Biology?

Raghav Dubey: Since Biology has the maximum number of questions, therefore, I focused more on completing Biology first. Then tried to complete Chemistry and Physics.

Raghav Dubey: Biology was not the toughest one, but there were some questions which were tricky. The chemistry was based on NCERT questions only, so it was moderate and Physics was the easiest one.

Raghav Dubey: When I had enough time to prepare for NEET 2019, I tried to cover as many topics as I can. However, by the time of D-day, I did not try to look for the leftover topics.

Raghav Dubey: I had a passion for swimming, which I had to drop due to preparations. I used to talk to my friends and family for some time during preparations.

Raghav Dubey: I am really thankful to my family, friends, and teachers.

Raghav Dubey: Only AIIMS, New Delhi, if I clear AIIMS MBBS 2019 with good scores. If not then, Maulana Azad Medical College, New Delhi.

Raghav Dubey: I never think a lot about the future. Just want to do what I am doing with positivity.

Raghav Dubey: Just be confident. Always follow the guidelines of teachers and experts and you will never need any other advice.

Im a student who completed 10 th in CBSE school and waiting for my results. Im aiming to beacome a microbiologist. Now what I have to do to enter a microbiology college. Is NEET important for that?

Neet is only for those who wants to enter into medicine that is Mbbs, Bds. For other courses related to biology you don't need to write neet exam. You need to concentrate on your board exams and you should get a very good mark in biology so that you can get into a very good college.  Some colleges have their own selection process but it depends on each college.

weighatage of all subjects of neet by chapter wise??

Important chapters for neet 2020 as per their previous year weightage in neet question papers are listed below subject wise :-

You can get chapter wise weightage of all the chapters for each of physics, chemistry and Biology for neet by going through our page for which link is provided below

which is the best online learning platform for NEET vedantu or unacademy ??

You will get following benefits in NEET knockout program:-

*money back guarantee if you don't qualify

And many more benefits

All the best for your neet preparation.

sir. what can be cut of this year for neet 20 20& how many seats are there in maharashtra after revised policy if any.

Cut offs change every year depending on various factors such as no.of Candidates appearing for the exam, no.of Candidates qualified, top NEET score and difficulty of the exam. Now you haven't mentioned your Category. Once NEET results have been declared and the merit list has been released by the DGHS, the State authorities will release the merit list for the State Candidates considering the marks and Category. Now your Category also plays a role in the cut offs. You can check the various reservations available in Maharashtra State Counselling at our page: https://medicine.careers360.com/articles/mbbs-seats-in-maharashtra . As of 2019, there were 4330 MBBS seats for Maharashtra and approximately more than 500 MBBS seats have been added for the last year. And there might be few more seats added and that will be more than 5000 MBBS seats available through Maharashtra State Counselling and All India Counselling. Now if you belong to Genera Category, you will need atleast 500 and above and if you belong to Reserved Categories, you will need atleast 450 and above. This is not just for GMCs but across all Medical Colleges. The cut offs might be higher for GMCs. Please visit our page https://medicine.careers360.com/articles/neet-cutoff-maharashtra for previous year cut offs.