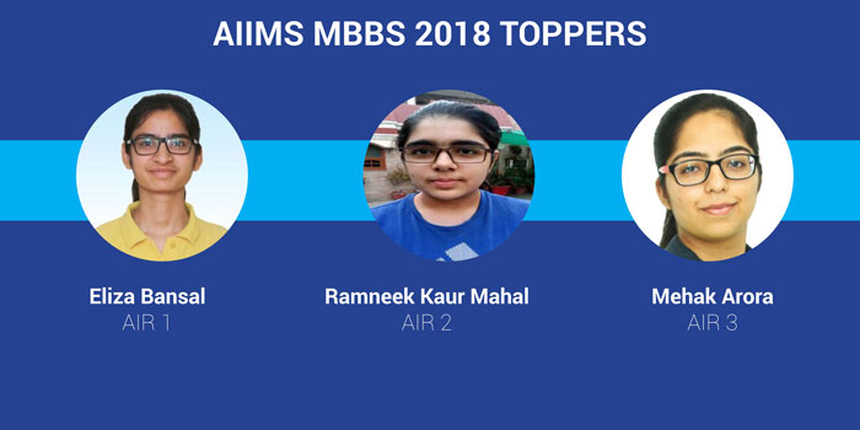 Nearly three lakh aspirants appeared for AIIMS MBBS 2018 across as many as 155 cities on May 26 and 27 for admission to 807 MBBS seats.

Have a look at the profiles, journeys and success stories of the AIIMS 2018 Toppers. Read the article below to know about their preparation strategies, hobbies, family background, and more.

Family Background - Her father is an Economics lecturer in a government school, whereas her mother is a librarian in a private college. Her elder brother is a student of IIT Delhi.

Future Plans - She wants to become a cardiologist.

Family Background - Her mother is a Chartered Accountant.

Preparation Strategy - He studied under the guidance of individual personal tutors for all the subjects separately. He solved online mock tests that included ten years’ IIT test papers as well. He studied for eight hours every day in the last one year. His strongest subject was Biology and weakest was Chemistry.

Family Background - His mother is a professor at RJ Tibrewal Commerce College in Ahmedabad while his father is a doctor at Dr. Jivraj Mehta Hospital.

Preparation Strategy - He abstained from using his smartphone and used to spend 12 hours in self-studies every day.

Preparation Strategy - He prepared majorly from NCERT books along with study material from coaching class. He used to discuss important topics with his friends and that helped him a lot in clearing his doubts. He gives the credit for this success to his father, sister and friends.

Preparation Strategy - I worked more on my weak areas and revised lessons repeatedly. I used to study for 12 hours a day.

Future Plan - He wants to become a neurosurgeon.

Family Background - His father is a Chartered Accountant, while his mother is a homemaker. His younger sister is studying in class 12.

Preparation Strategy - He used to study for ten hours every day.

Future Plan - He wants to become a doctor in oncology.

Preparation Strategy - He took coaching classes as well as did self-studies. He solved last ten years’ papers of IIT along with online mock tests. He avoided social gatherings during the preparation phase in order to avoid any kind of distraction. His strongest subject was Biology and the weakest was Physics.

Preparation Strategy - She created a balance between studies and all other activities during the preparation phase. She also deactivated her accounts on social media but used to watch YouTube videos to relax herself.