The Central Board of Secondary Education has successfully conducted the National Eligibility cum Entrance Test (NEET) on May 6, 2018. As per statistics released by the CBSE, 13,26,725 candidates registered for the exam this year, an increase of 1,87,835 from the 11,38,890 registrations received last year. Admissions to more than 90,000 MBBS and BDS seats, in addition to seats in all Ayurveda, Yoga and Naturopathy, Unani, Siddha and Homoeopathy (AYUSH) courses across the country, will be held on the basis of NEET scores. The CBSE also released a message on its official NEET website on May 6 post the exam, which declared “CBSE conveys thanks to all the candidates for their support in holding the NEET-UG successfully”. 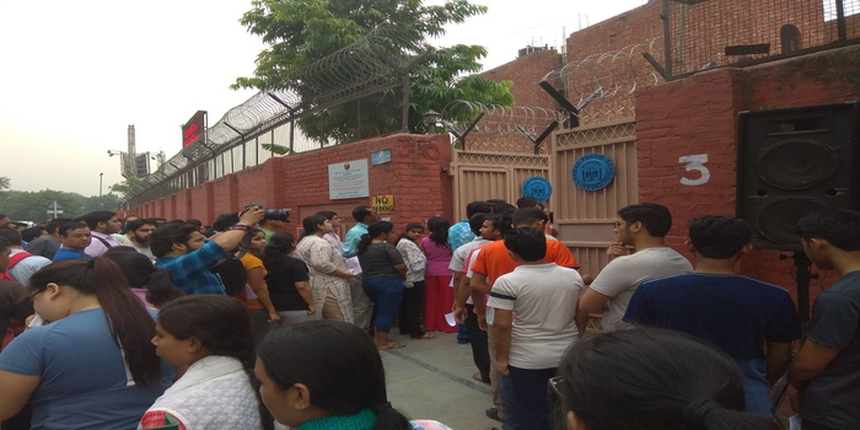 As per a detailed press release issued by the CBSE on May 7, 2018,  NEET was held in 2255 centres across 136 cities. The maximum number of candidates had opted to appear for NEET in English, followed by Hindi. Among the 9 vernacular languages, Gujarati was chosen the most while Oriya was opted for by the least number of candidates. The CBSE had also released a NEET statistics sheet before the exam in which the number of candidates per exam centre was revealed. Lakshadweep has the lowest number of candidates registered for NEET 2018 with 697 while Maharashtra had the highest with 1,83,961.

As has become the norm in NEET, one of the major headlines which grabbed eyeballs on exam day revolved around the strict and controversial enforcement of NEET dress code rules in various exam centres. All the major statistical highlights pertaining to the administration of NEET 2018 as well as with regard to the students who appeared for the same can be seen in the article below.

Increase in NEET/AIPMT registrations – 2015 to now

As per the initial data released by the CBSE with the NEET 2018 prospectus on February 8, the exam was scheduled to be conducted across 150 exam cities, a significant rise from the 103 cities in which it was held last year. The same was confirmed through tweets sent out later in the month by MHRD Minister Prakash Javadekar.

However, on the day before the exam, the CBSE issued its statistical sheet showing that NEET 2018 would only be held in 136 cities. The list of cities which were removed was not made available publicly. However, the number of exam centres was revealed to be 2255, much higher than the 1921 exam centres in 2017. Check the comparison regarding NEET exam centres in 2018 with NEET 2017 below.

Tamil Nadu, which has always had a frosty relationship with NEET, once again reignited its feud when it was revealed that numerous candidates had been allotted exam centres outside the state. As is visible from the ‘Top NEET states in terms of exam centres’ and ‘Top NEET states in terms of exam candidates’ tables above, Karnataka did not feature in the top five states in the latter, receiving only 96,377 registrations. The state was however inexplicably allotted 17 more centres than Tamil Nadu, which had received 1,07,288 registrations.

Affected candidates in Tamil Nadu approached the Madras High Court to rectify the situation which would require them to travel long distances to reach their allotted centres in Kerala and Rajasthan. While the Madras High Court ordered the CBSE to reallot all Tamil Nadu candidates centres within the state itself, the same order was stayed by the Supreme Court, which meant aspirants had to appear for NEET in their originally allotted centres only, irrespective of the distance.

As per CBSE rebuttal however, all candidates who had opted for Tamil as their medium were allotted centres within Tamil Nadu itself while the candidate who had been allotted Udaipur as an exam centre had opted for the same as per his NEET application records.

In a first, NEET 2018 was held in a record 11 languages this year thanks to the inclusion of Urdu to the list originally comprising English and Hindi in addition to Gujarati, Marathi, Oriya, Bengali, Assamese, Telugu, Tamil and Kannada. The number of candidates registering for NEET in each language in 2018 and 2017 can be seen below.

The calls to introduce Urdu, as repeatedly promulgated by the Students Islamic Organization of India (SIO) last year, seem to have paid clear dividends for NEET aspirants this year, with more candidates opting to appear in the language than in Marathi, Oriya and Kannada.

The number of candidates appearing for NEET in English has remained the highest among all languages, with 9,13,033 registering last year and 10,60,923 registering this year.

Despite clear strict guidelines being issued time and again by the CBSE, this year’s NEET was once again plagued by controversies revolving around the enforcement of the dress code rules. With media reports circulating around various incidents of female candidates being made to undergo particularly severe hardships before being able to enter their NEET exam centres across the country, the National Human Rights Commission (NHRC) decided to step in this year and issued notices to the CBSE and the Tamil Nadu Government asking for detailed reports over these incidents.

As per the CBSE however, all candidates were repeatedly sent messages regarding the dress code and other NEET rules and regulations. With every candidate being sent an individual SMS, a total of nearly 1.33 crore SMSes were sent between the closing of registrations and the exam day. Similarly, more than 1 lakh SMSes and 30,000 emails were sent to the exam centres regarding these issues so that the exam could be conducted smoothly.